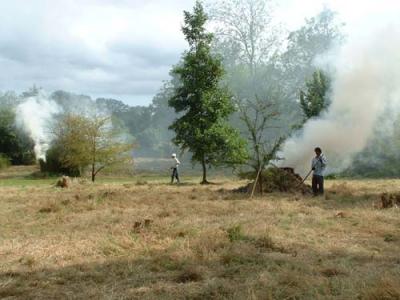 An area of rare wet grass land in Grundisburgh has been preserved to celebrate the Millennium - the first conservation area in the parish. This small field is situated at the end of the driftway off Lower Road on the edge of the village.
The picture shows volunteers mowing, raking and burning grass.
The Meadow has been part of the Grundisburgh Estate for hundreds of years and never having been developed, is relatively undisturbed. The owner, Lord Cranworth, who suggested  the site, invited the parish council to join with him in the venture and granted the council a 100 year lease.   Lord Cranworth officially opened the meadow on  the 20th July, 2000.The meadow is managed by the Grundisburgh Conservation Group supported by the Greenways Countryside project. The meadow is both a conservation area and an area open to the public for quiet enjoyment. The mown path can be used as a loop extension to the footpath to Great Bealings.

At the opening Lord Cranworth said:

“I do believe that this meadow will become very important as the years go by as more and more wetlands are lost to development. It is therefore a fitting way for the present generation to celebrate the Millennium by preserving an area for future generations to enjoy”.

“To many people this piece of land may seem insignificant and uninteresting but its importance cannot be overstated.     A botanical survey has revealed rare plants which can only survive in a wet area such as this.
The meadow will show future generations of what many thousands of acres of Suffolk countryside used to look like.     This has been a real community venture with many villagers spending many hours working to bring the meadow back to something like its original state.     The helpers have included lots of   local children.     We have been considerably helped by a very generous grant from the Shell Better Britain Campaign"

"Unimproved grassland which has not been treated with fertiliser or chemicals cover less than 1% of Suffolk and is one of the rarest habitats in the county.   With the proper management the meadow will become an important local wildlife resource for people to enjoy”

Local residents recall visits as children to the fens and river bank for picnics.

John Digby, a local naturalist, has identified 150 species of plants and trees on the meadow.   It is a popular area for dragon flies and supports a sizeable rabbit population who enjoy the fine grass.
Most common flower is red campion. Most unusual bristle scirpus.
Around the hedge boundaries are a fine oak pollard and three large coppiced ash stools.
On the east is a mixed damson, hawthorn & blackthorn hedge close to the small alder carr that leads to the river.
The site has a mixed geology.   In the river’s flood plain with   islands of heavy clay in the sandy gravel or peat.   Its most valuable feature is the wetter area across the centre and management is directed at utilising the available water from nearby springs to best advantage.