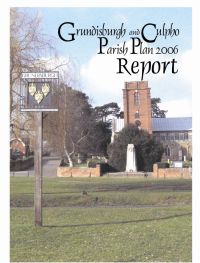 A  PARISH PLAN  gives everyone a chance to have their say about the future of their village covering issues such as housing, public transport, sport & entertainment, education, youth services, services for the elderly, policing, village services, road safety, village halls, and the environment.

A Steering Committee, representative of village life, was formed in 2003 to spearhead the project and   after three years hard work by nearly 100 volunteers, aided by a grant of £5,000 from the Countryside Agency, it  was completed.

Six Focus Groups dealing with local government, parish facilities & services, over 60’s, young people, environment and local business & employers were formed and from their work the questionnaires were compiled with 82 questions for the household and 31 for a special young people's questionnaire.

Questionnaires were delivered to 672 dwellings in the villages. These were collected and the results collated into a Report and an Action Plan which was presented to the parish council at the Annual Parish Meeting on the 20th April, 2006.

Over 84% of households completed questionnaires which gives the report real weight and authority and will help the parish council considerably in carrying out the Action Plan which has  61 recommendations.

Highlights from the Parish Plan Report

The Plan gave the Parish Council very clear signals what parishioners want but set the Council an enormous task with 61 Action Points to take in hand.   To get the task down to size the council decided to adopt a priority list of those issues which seemed to be of greater importance to villagers. These are:

In response to the need for a new hall expressed in the Parish Plan The Village Hall Management Committee appointed a Steering Group in 2006. A scheme was drawn up in 2007 to build a new hall on the field opposite the existing hall funded in part by an enabling development where the landowner gives land and a contribution to the building of a new hall in exchange for permission to build a number of houses on adjacent land. Progress was stalled in the early years, waiting for Suffolk Coastal District Councils Local Development Plan to be completed, but changes in planning law and the Localism Act 2011 gave new impetus to the scheme. The Group held a series of Open Houses in April 2013 to explain the Group’s plans. 208 residents completed a questionnaire with 85% supporting the Group’s proposals. Since the Open Houses the Steering Group  was busy negotiating the final structure of an enabling development with both the landowner and Suffolk Coast District Council. The result of these negotiations has been pretty much the same as the scheme outlined at the Open Houses and an Outline Planning Application (AOP) was  submitted to the District Council in November, 2013 and was approved at a meeting of the District Council's South Development Control Committee held on the 3rd April, 2014. The AOP crystallised the agreement between the Steering Group, on behalf of the Village Hall Management Committee, and the landowner with provisions to satisfy planning requirements imposed by the District and County Councils. The main points are that the landowner will contribute £250,000, plus £30,000 to replace trees that have to be removed to provide a safe splay for the entrance and one acre of land along Ipswich Road on which to build a hall and receive permission from the District Council   to sell another four acres for residential development.

Detailed planning permission has been granted for residential development of 24 dwellings which include 8 affordable units – 4 one bed flats and 4 two bed bungalows which will be managed by Orwell Housing Association. Building is now well underway.

Permission has also been granted for the new village hall and once the old site has been sold for housing and more funding secured building will start.

To form a Grundisburgh Youth Committee and Youth Club

At a meeting 30 young people voiced their enthusiasm for a club. They said they simply want somewhere to go where they could meet their friends, giving them somewhere to go and something to do. Questionnaires they completed gave the kind of activities they would like the club to provide and, most encouragingly, over half said they would like to be part of the Grundisburgh Youth Committee to help in decision making and the running of the club.
This has now been achieved.   A £7,000 grant has been obtained from the Local Network Fund to start a Youth Club  by the Grundisburgh  Youth Committee and it  has opened for   on Thursday evenings in the Village Hall.

A Committee has been formed to look at the Road Safety issues raised in the Plan. These include Horse Warning Signs and speed limits for Charity Lane. Extended speed limits on Stoney Road and a 30mph limit for Culpho. Improved visibility at the Playford cross roads and measures to stop vehicles driving through the Village Green ford.