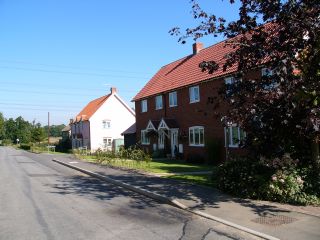 Good news for those whose roots are in Grundisburgh and  want to stay and set up  home in what they feel is "their" village and are being forced out by  high house prices and the few houses available at affordable rents.

Ablitts Meadow affordable housing scheme - a Rural Housing Trust development with the support of the Parish Council and Suffolk Coastal District Council, is exclusively for them. The scheme, completed in 2006,  contains 20 houses, 2 bungalows and 2 flats which will be available in perpetuity for those with strong local connections; providing accommodation for a wide spectrum of housing needs - some for rent and some sold on shared ownership.

To qualify applicants for housing on this development must have a strong local connection which means one or more of the following:-

Selection is then based on housing need.

The land, which was Glebe Land owned by St.Edmundsbury & Ipswich Diocese Board of Finance, is known as an “exception site” because it would not be normally released for housing.   However, an exception to the planning rules was made because local needs were demonstrated and the houses will be available at affordable prices to local people in perpetuity.

The site was known as ABLITTS MEADOW in pre-war days. At that time it was rough grass and a favourite place for gypsies to camp. At the bottom of the meadow was a pond and the gypsies would cut willow there and nearby for peg making.

The Ablitt family were farmers and very early farm contractors. Robert Ablitt lived with his wife Kate in Balcony House, now known as “Hillingdon”, in The Street, Grundisburgh. They also lived for some time in Hill House on the Woodbridge Road.

Two of their sons died in the 1st World War and are commemorated on the village war memorial. George Ablitt died on the 12th October, 1916 aged 32 and his younger brother Frederick aged 20 died seven  months  later on the 7th May, 1917. So the development commemorates an old village family, a long forgotten field name and two brothers who lost their lives in the service of their country. 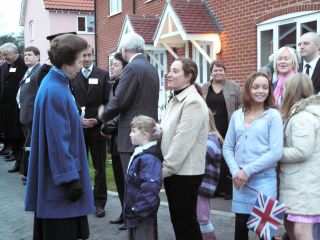 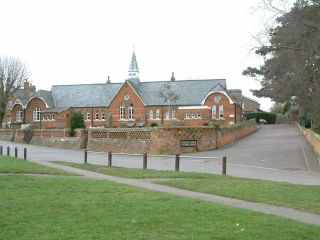 2004 saw the 10th Anniversary of the opening of the Old School housing development in Grundisburgh.It was opened by our MP at the time, John Gummer, on the 24th July, 1994. The Parish Council was very concerned that the old Victorian building, built in 1874, should be preserved when the school moved to new premises in late 1989. One of the first steps was to get the building Grade 11 listed which ensured that no drastic alterations to the buildings could be made and the school now looks very much as it did when it was occupied by generations of village children. A feasibility study was conducted. Several options were investigated including sheltered housing, a community centre, first time buyers, single person units and small business units. This study was the beginning of a very long process with many obstacles and difficulties to over come. Several Housing Associations were approached but declined to take on a project which involved converting a listed building.

Finally, English Churches Housing took on the challenge in partnership with the Housing Corporation, Suffolk Coastal District Council, and the Parish Council. A scheme was drawn up to convert the school and the Headmaster’s house into eight homes for the elderly and to build eight new houses on land behind the school. All the homes to be for people in housing need and who have a local connection with the village. The total cost was £1,117,724.

If any villager wishes to be considered when a vacancy occurs they should contact:  Suffolk Housing Society, Old Mission House, St.Botolph's Lane, Bury St.Edmunds, Suffolk IP33 2AX.      Telephone:  01284-767224     Email: customerservice@suffolkhousing.org
Back to top